A safe airways system relies on pilots and controllers working together safely and effectively. This can, in part, be achieved by increasing awareness of the air traffic system and showing how pilot activities, decisions and operations can impact it.

The National Aeronautical Information Processing Systems (NAIPS) Internet Service (NIS) is a multi-function, computerised, aeronautical information system. It processes and stores meteorological and NOTAM information as well as enabling the provision of briefing products and services to pilots and the Australian Air Traffic Control platform.

Airservices has developed a range of short videos to guide pilots through the following NIS functions.

More detailed information on using NIS is contained in the NAIPS Internet Service User Manual, on the Documents and Downloads section of the NAIPS homepage.

Airservices has produced a pilot estimates poster to remind pilots of the importance of maintaining accurate estimates. Please print, display and promote accurate pilot estimates within your organisation.

For more information or to obtain a copy of the poster email safety.promotions@airservicesaustralia.com.

Communication with air traffic control (ATC) involves exchanging safety-critical information between pilots and air traffic controllers. Radiotelephony (RTF) discipline, including use of correct phraseology and readbacks, not over-transmitting other stations and maintaining a good listening watch also make for safe and effective communication.

Pilots are often surprised when there is a delay following a request for a visual flight rules (VFR) clearance. The information below explains the internal processes that must occur within air traffic control (ATC) for such a request to be processed.

The processes described here are generalisations and may vary in detail depending on the time of day and the location. They also apply only to clearance requests made to Centre or Approach/Departures. The processes for obtaining a clearance directly from a Class C or D Tower will differ.

When requesting a clearance from Centre or Approach/Departures, make your request on the area frequency for the area you’re in, unless a particular frequency is specified in ERSA. ATC will transfer you to the correct frequency if necessary. 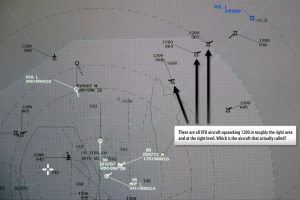 Before any surveillance-based services can be provided, controllers must establish positive identification of the aircraft concerned. VFR aircraft squawking 1200 are shown on ATC air situation displays as relatively inconspicuous black tracks. Furthermore, there may be more than one VFR track in the relevant area.

In this situation the usual means of establishing identification is to instruct the pilot to squawk a discrete (individual) code. To obtain a discrete code, it is normally necessary for a flight plan (flight notification) to exist within the ATC Eurocat system. However, inactive VFR plans are not always displayed to controllers, so the first question you are likely to get from a controller is “have you got a flight plan in the system?” 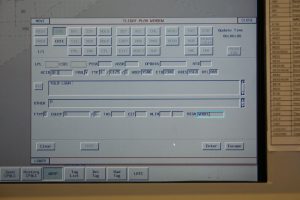 The ATC Eurocat flight plan window contains the flight plan details for an individual flight, including the SSR code which is automatically allocated by the system. Creation of a flight plan using this window is a time-consuming and complex process.

If a flight plan has been submitted, it is a relatively simple process for ATC to access and activate it. If not, then the controller will have to take details over the air and create a plan. This is a relatively time-consuming and complex process. Remember: even if your details have changed, it is much easier to amend an existing plan than to create one from scratch. 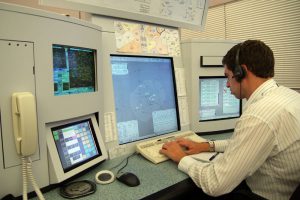 This photo shows a typical ATC Eurocat workstation. The main air situation display is the large screen in the centre. At lower left is the communications control panel and above that is a screen that can be used to display ancillary information such as weather radar images, checklists or charts.

Submitting a flight plan before take-off can greatly speed up the clearance process or improve your chances of getting a clearance. It costs nothing and will self-cancel in due course if it is never activated. However, if needed, it will be there waiting for you and for ATC.

Once your discrete code has been detected, Eurocat can couple the flight plan details to the track on the controller’s display. Green tracks are known as ‘Jurisdiction’ and indicate who has responsibility for the flight.

Once ATC has activated the flight plan and instructed you to squawk a discrete code, it will take a few moments for the surveillance system to detect your squawk, couple the flight plan details to it and display the details to the controller. Your aircraft’s track will now have an interactive label attached to it (see above), and there will be an electronic flight strip giving controllers access to further information about your flight. 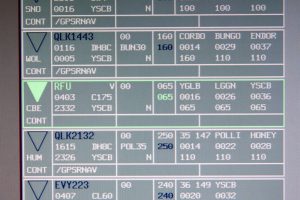 An electronic ‘strip’ for each flight gives the controller information about the aircraft’s intentions derived from the flight plan, modified as necessary as the flight progresses.

Step 5 – Co-ordination with other controllers

Once the flight plan has coupled to a track, identification has been positively established. In many locations the controller talking to you will now need to coordinate with other controllers about your flight before a clearance is approved. For example, at the capital cities the Flow Controller is usually the arbiter of access to the terminal area for VFR flights. This is because VFR flights can have a significant impact on the processing of scheduled IFR traffic to the major airports. 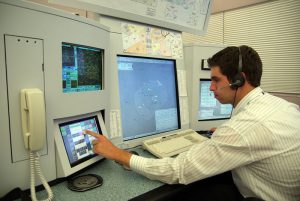 Controllers use a touch-screen Voice Switching and Communications System to coordinate flights with other controllers.

Each location has preferred routes and/or levels for accepting VFR traffic, which may vary depending on the day of the week, or the time of day. You can often help your chances of obtaining a clearance through busy terminal areas by telephoning the terminal area supervisor before you flight plan. They will be able to advise on the best routes, levels or times to plan. This is particularly valuable if you want to do something unusual, for example some sightseeing or other airwork. The applicable phone numbers are listed in ERSA.

You can see that there are a number of steps that must occur within ATC, not all of them visible to the pilot, before a VFR clearance can be issued. All of this takes time, and the controller will have other aircraft to manage as well. You can improve your chances of obtaining a clearance, reduce delays and minimise the risk of an airspace infringement by:

Flight following is a free ongoing Surveillance Information Service (SIS) available to VFR flights in Class E and G airspace. This service is provided to improve situational awareness and assist pilots in avoiding collisions with other aircraft. It is available on request, but always subject to air traffic services (ATS) workload.

Whether operating at a Metropolitan Class D (ex-GAAP) or a Regional Class D aerodrome, the principles of operating in Class D airspace are the same. However, there are several areas of confusion raised by pilots, including:

Operating at metropolitan Class D airports can pose a range of additional considerations for pilots, due to their complex aerodrome layouts and diverse traffic mix combined with individual pilot experience. In addition to the information contained in AIP, ERSA and CASA On Track, Airservices provides the following tips to assist pilots operating at these aerodromes.

Tips for flying at Jandakot

Tips for flying at Cambridge

Tips for flying at Parafield

Tips for flying at Archerfield

Tips for flying at Moorabbin

Tips for flying at Bankstown

Vertical or lateral deviation from Standard Arrival Routes (STARs) can affect the safety and efficiency of a flight. Airservices STARs fact sheet details some common areas of confusion regarding the requirements to follow STAR tracks and heights.