NFPMS uses long-term noise monitors located within local communities and is the world’s largest, most geographically-spread system of its type. Some long-term monitors have been in place for more than 20 years.

Access our noise monitor reporting by clicking the button below.

Why do you undertake noise monitoring? Expand

Long-term aircraft noise monitoring data is used by a variety of organisations for different purposes, including the Department of Infrastructure, Transport, Regional Development and Communications, airports and airlines.  Noise monitoring is not undertaken to determine compliance with aircraft noise regulations—there are no Australian regulations which specify a maximum, allowed level of aircraft noise within the community.

Rather it is undertaken to:

Short-term noise monitors can be installed for a range of reasons including to address a specific community concern, at the request of a Minister, as part of a Commonwealth approval condition, or to support a study, report or review undertaken by Airservices.

The results of short-term noise monitoring can be used to:

Where are noise monitors installed? Expand

How do you decide where to install a noise monitor? Expand

All noise monitors must be located in areas that effectively capture noise data from arriving and departing aircraft and therefore we try to locate monitors as close to flight paths as possible.  The decisions on final locations of monitors take into account a number of other factors, including security, licensing, facilities and background noise levels.

We use the following criteria when identifying suitable locations for a long-term noise monitor:

We use the following information to identify potential locations for short-term noise monitors:

Can I get a noise monitor installed at my home? Expand

Private residences are not good locations for long-term noise monitors as they are more likely to change ownership or occupancy which increases the risk of having to relocate the monitor. In addition, access for maintenance can be more difficult.

We may, however, install short-term noise monitors on private properties as they are a portable unit and are in place for a limited time period (typically three months).

Can I suggest a noise monitor location? Expand

We do not take unsolicited suggestions for long-term noise monitor locations, but may work through the airport Community Aviation Consultation Groups and with the community, to obtain input on planned long-term installations. Additional long-term noise monitors are only added to our network on rare occasions, generally when there is a large change in operations at one of Australia’s major airports (for example a new runway and flight paths becomes operational).

How do I suggest a short-term noise monitoring location? Expand

If your suggestion meets our criteria, you can provide it to your local airport Community Aviation Consultation Group who will review the suggestion and decide if they will progress it to Airservices.

We may also seek suggestions directly from the community through our community engagement website Engage Airservices.

To ensure that your suggestion can be effectively considered you should clearly explain what concern you are asking a noise monitor to address (i.e. which aircraft, which airport, when and why) and what having a noise monitor installed for a period of time, would achieve. If your suggestion is related to seasonal use, we also recommend that you include this information so if your proposal is accepted, we can schedule monitoring for an appropriate time of year.

Why have you not installed a noise monitor in my area? Expand

Some of the common reasons we may not install a short-term monitor in your suggested location are:

How is aircraft noise measured? Expand

As an aircraft flies over a monitor, the noise level rises above the background noise level, peaks (usually within 10 seconds) and then slowly returns to the background level. This is a noise event and it lasts for around 20-40 seconds but varies depending on the height, type and loudness of the aircraft.

How do noise monitors work? Expand

A noise monitor, also referred to as a noise monitoring terminal (NMT) consists of a microphone attached to a mast and an electronics box. The microphone continuously measures the noise level within the range of 30 to 130 decibels. Noise data is downloaded to a central computer system and recorded noise events are matched to aircraft flights within a set distance of the noise monitor.

A noise monitor cannot separate the noise it captures into different individual sources but rather there is a cumulative noise effect which results. In a quiet area, aircraft noise will likely be the dominant noise captured but sometimes other noise sources can be responsible for the maximum noise level, in a correlated aircraft noise event.

Do any standards apply to noise monitoring? Expand

There are International Standards that apply to noise monitoring, known as ISO 20906:2009 - Unattended monitoring of aircraft sound in the vicinity of airports. Under these standards a number of considerations need to be taken into account when selecting a potential noise monitoring site.

One of these considerations is the angle from the ground plane between the monitor and aircraft - the elevation angle of aircraft relative to the ground should be at least 30⁰, with an optimal angle greater than 60⁰ to limit uncertainty in sound measurement.

Background noise levels should be representative of overall community noise in the local area. We will generally not place a noise monitor in a non-residential area and aim to place noise monitors as close to directly under the flight path as possible.

How is aircraft noise regulated in Australia? Expand

Are there any limitations to the data collected by your NFPMS? Expand

Our NFPMS was originally set up to monitor operations at major airports across Australia and relies upon obtaining the details of aircraft operations from lodged flight plans.

Over time, the NFPMS has expanded to include other airports in Australia’s main cities, within 50km of the main airport. However, the source radar data for these cities is still obtained from the main city airport, which can result in data gaps (depending on the distance of the secondary airport from the main airport). As these data gaps occur randomly throughout the day, the data, while incomplete, still provides a representative picture of the weekly, hourly and day/night distribution of aircraft operations.

General Aviation (GA) airports, such as Archerfield, Jandakot, Moorabbin and Parafield, have a high proportion of operations relating to training and GA. As a result, the majority of movements at these airports do not lodge a detailed flight plan and therefore there is limited aircraft identification data captured in the NFPMS. Aircraft operations at GA airports include higher numbers of small aircraft operating in closer proximity, compared to operations at major airports. These types of operations, combined with gaps in radar data and limited flight plan information, are all factors that impact the accuracy of the flight identification process in our NFPMS. 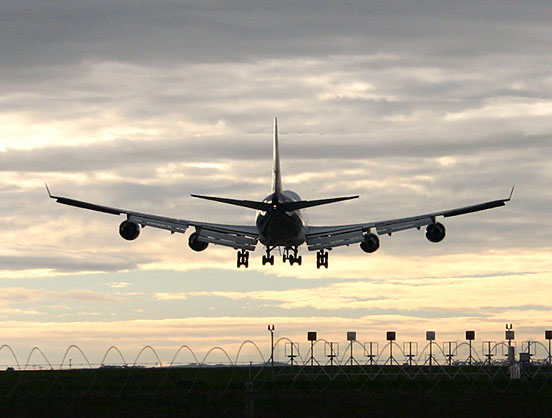