Marking 45 years of service, many past and present members of Aviation Rescue Fire Fighting Service (ARFFS) Sydney came together recently for one of their own, Station Officer Chris Goff.

Starting in May 1974, Chris had a long and varied career, recently completing more than 2300 responses as Officer-In-Charge with an estimated 5000 plus operational responses during his career.

It all began for Chris at Bankstown Airport where within 10 minutes of starting his first shift, the crash alarm was activated and he responded to a Cessna that had ended off the runway.

While at Bankstown Airport Chris was also required to cover Camden Airport on weekends.

He said this was an eye opener as the crash alarm was activated by the Air Traffic Controller banging on the Fire Station wall as there was no communications system back then.

Both ARFFS and Air Traffic Control were housed in nothing bigger than a kitchen by today’s standards, with the vehicle parked outside.

While finding it difficult to single out any one particular highlight or response, Chris said he’ll never forget an incident at Sydney Airport in 1981, where he stopped a runaway plane from crashing into a passenger aircraft by using one of the fire trucks.

For his actions that day, Chris was awarded the Commendation for Brave Conduct Medal by the Governor General.

As one of ARFFS longest serving members nationally, congratulations and thank you for your service so far and your contribution to ARFFS and keeping the flying public safe. 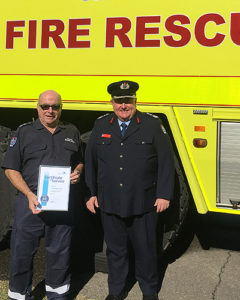 Airservices Australia has appointed global air traffic management advisor, Trax International, to independently review and make improvement recommendations across all aspects of the design and conduct of the Airservices Post Implementation Review of Brisbane airspace. Trax International brings significant experience working on similar airspace, flightpath and airport changes overseas, including in the United Kingdom at […]

Check out all the video action of Santa’s visit to Airservices here. With Christmas fast approaching, Santa made a special, top-secret trip to Airservices Australia this week to confirm his flight path and ensure all is in order for Operation Present Drop on Christmas Eve. As Australia’s official Santa flight management team, Airservices has allocated […]

Forging a career as an air traffic controller takes great self-discipline, confident decision making and the ability to perform under pressure – just ask razor-sharp 88-year-old veteran John Bowing – who still works out daily to keep in tip-top shape. “I’m 25,” he quipped. “I’ve got an old wind-resistant exercise bike at home and do […]

Airservices Australia has published its 2020-21 Annual Report, highlighting our ability to adapt, maintain momentum and ensure the continuity and integrity of our service delivery amid another year of disruption. During the last financial year, international airline traffic declined by 68 per cent and domestic air traffic rose and fell with border closures, leading to […]