Home » About us » About our operations » Circuit training

Circuit training is the first stage of practical pilot training, focused on take-offs and landings. It involves the pilot making approaches to the runway, touching down and then applying power to take-off again.

Circuit training is undertaken at most airports, particularly regional and general aviation aerodromes. How a circuit is flown and its location is determined by the Civil Aviation Safety Authority.

The size and location of the circuit is controlled to ensure the safety of all aircraft operations at the airport. This may result in training being undertaken over populated areas, in close proximity to the airport.

Are there any restrictions on the times and days circuit training can occur? Expand

Each airport makes its own decision about the hours of the day and days of the week during which training may take place. There are no regulated hours for circuit training,

This is usually based on:

Training during both day and night is important for developing pilot competencies and experience using different types of navigational aids, however many airports prohibit circuit training at night and in the early morning. Airports publish this information on their websites.

Who do some aircraft fly a circuit outside training hours? Expand

For safety reasons, aircraft that are landing at non-controlled aerodromes are advised to use a circuit pattern on approach. This means that it may sometimes appear that aircraft are circuit training out of hours, when in fact they are following prescribed procedures for landing.

As different airports have different facilities, the numbers and timing of circuit training flights varies between locations.

A typical training circuit consists of five legs - the take-off, crosswind, downwind, base and final approach to the runway. The take-off and final stage of the circuit is usually flown into the wind, as this is the safest way for an aircraft to operate.

The direction of the training circuit depends on local terrain, weather and the position of the runway/s at the airport.

A left hand circuit has the aircraft turning left after take-off and flying anticlockwise. This is the most common type of circuit operation. The aircraft symbols and dotted lines indicate recommended ways for an aircraft to join the circuit pattern. 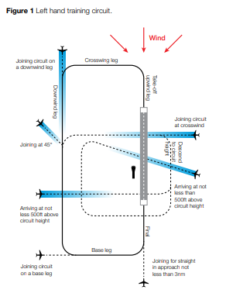 Where a right hand circuit is used, a pilot turns right after take-off for a clockwise circuit. This may occur because of high terrain restricting circuit operations to one side of the runway, regardless of the wind direction. Right hand circuits may also be used at airports with parallel runways, such as Bankstown, Moorabbin and Parafield. During air traffic control service hours, circuit operations can be conducted off both parallel runways at the same time. This means both left and right hand circuits may be flown at the same time.

How do aircraft join and depart a circuit? Expand

Aircraft can depart from the circuit by extending one of the four legs and are only allowed to turn away from the extended leg when well clear of the circuit.

The circuit length, and therefore the area overflown, depends on how quickly the aircraft can climb to the required height for the downwind leg. This length varies between aircraft and is affected by meteorological conditions (including wind, cloud cover, and temperature), other aircraft in the circuit, air traffic control requirements and pilot proficiency.

Are there noise standards for training aircraft? Expand

Training aircraft are certified to international noise standards which are implemented in Australia through the Air Navigation (Aircraft Noise) Regulations 2018.

These noise standards apply to the design and production of aircraft and specify the amount of noise that may be made by an aircraft model/ type. The regulations are administered by the Department of Infrastructure, Transport, Regional Development and Communications.

What are fly neighbourly agreements? Expand

Information on Fly Neighbourly Agreements is available on airport websites.