Contrails, what are they? 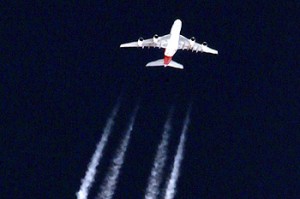 Contrails created by an A380.

Condensation trails or ‘contrails’ are white, cloud-like streams that are sometimes visible behind jet aircraft, normally when cruising at high altitude. Contrails are emitted by jet aircraft under certain conditions. Jet aircraft emit a range of gasses in flight, including water vapour and sulphur particles.

At the high altitudes at which jet aircraft cruise (26 000 ft or 8 000 m), the air is very cold. Colder air is less able to hold water vapour. Therefore, if there is a large amount of water vapour in the air (high humidity), it rapidly condenses on sulphur particles that have come out of the aircraft engine, turning into droplets of water. Water vapour emitted by the aircraft engine will also turn into droplets of water in the same way.

At such high altitudes the temperature is far below freezing and the droplets will quickly form ice particles, making up a white contrail. Being made from ice, contrails are harmless to health. Eventually, when conditions become dry enough (lower humidity levels), the ice particles will evaporate, meaning that they do not reach the ground.

Why and how long does a contrail last?

The length of a contrail depends on atmospheric conditions. If humidity is low, when there is little water vapour in the air to turn into ice, the contrail will be short-lived. The few ice particles that are formed will quickly evaporate and mix into the surrounding atmosphere.

However, if the humidity is high (as is often the case in the east and north of Australia), the large amount of water vapour present in the atmosphere will readily condense on the sulphur particles emitted along the track of the jet aircraft.

The newly-formed ice particles will grow in size by taking water from the surrounding atmosphere. As a result, these contrails can last for hours, extending long distances behind the aircraft. Air turbulence, caused by winds or by other aircraft, can lead to the contrails spreading out, sometimes reaching several kilometres in width and 200-400 metres in height. This means that they can develop into extensive cirrus clouds that are indistinguishable from naturally occurring clouds.

Sometimes a jet aircraft leaving a persistent contrail will appear to be close to another that has no contrail. This is normally because the aircraft are at different altitudes, which cannot be perceived from the ground, and the air around the higher aircraft will have greater humidity because it is colder than that around the lower aircraft.

Why contrails may become more prevalent

As air traffic continues to increase, including in areas of high humidity, it is likely that more persistent contrails will be formed. However, international regulations already minimise the emissions of impurities from jet engines so that sulphur makes up less than 0.05% of jet fuel by weight. It is likely that improvements in engine efficiency will reduce this even further so that in future, there may be fewer particles emitted from jet aircraft that help form the ice that creates contrails.