Airservices is a corporate Commonwealth entity with statutory responsibilities. We are wholly owned by the Australian Government and are governed by a Board of Directors appointed by the Minister for Infrastructure and Transport.

The Board is responsible for deciding the objectives, strategies and policies to be followed by Airservices, and ensuring that we perform our functions in a proper, efficient and effective manner.

The functions of the Board are set out in Section 21 of the Air Services Act 1995. 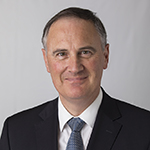 John Weber has been a member of Airservices Board since April 2017 and was appointed as Chairman on 3 June 2018. His current term expires on 2 June 2021.

Mr Weber served as the Australian managing partner of DLA Piper, one of the world’s largest law firms, from 2014 to 2017. He was also a member of DLA Piper’s international executive. Prior to that he was chief executive of Minter Ellison, a leading Australian law firm, for six years and a member of its executive management team for eleven years.

Mr Weber has worked extensively in the transport sector (rail and aviation), health, financial services and defence / security sectors for both industry and government.

Mr Weber is also a member of the Australian Institute of Company Directors and has extensive board experience across a diverse range of organisations in the public, private and not-for-profit sectors including the European Australian Business Council, the Council of the Asia Society, the ABCN Foundation, and the Horizons Foundation. 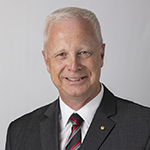 Deputy Chair and Chair, Board Remuneration and Human Resources Committee

Air Chief Marshal Binskin (Ret’d) is a highly decorated and respected senior executive and leader in the national security, defence and aerospace sectors, most recently as Chief of the Defence Force of Australia from 2014-2018, and earlier as Vice Chief of the Defence Force (2011-2014) and Chief of Air Force (2008-2011). He is currently Deputy Chair of the Sir Richard Williams Foundation, on the Boards of the Western City and Aerotroplis Authority and the Australian International Military Games (Invictus Games Sydney 2018) and is non-executive director defence and national security policy with BAE Systems Australia.

As Chief of Defence, Air Chief Marshal Binskin (Ret’d) successfully led the Australian Defence Force, comprising 80,000 permanent and reserve personnel, to significantly improve capabilities and responses to major global events and championed organisational change across areas of national security, culture, diversity and leadership performance. He oversaw the First Principles Review of Defence and delivered the successful implementation of the One Defence approach.

Air Chief Marshal Binskin (Ret’d) has provided specialist advice to the highest levels of governments, industry leaders and international stakeholders and his aerospace knowledge and expertise is extensive. He has over 3,500 hours in single seat fighter aircraft including the A-4G Skyhawk, Mirage 111O, F-16C and F/A-18 Hornet, and continues to be active in general aviation, is a warbird owner and holds Commercial, Remote and Recreational Aviation Australia pilot licences.

Air Chief Marshal Binskin (Ret’d) has completed the Harvard Business School Advanced Management Program, is a graduate of the Australian Institute of Company Directors and a Fellow of the Royal Aeronautical Society. 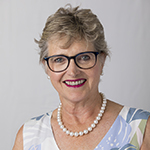 Ms Balfour was appointed to the Board on 3 June 2013. She is Chair of the Board Safety Committee and is a member of the Audit and Risk Committee and the Technology and Investment Committee. Her current term expires on 2 June 2020.

Ms Balfour has almost 40 years’ experience across aviation, information and telecommunication services, distribution and logistics and corporate governance. She has been an advisor to Medibank Private Limited and was previously CIO at Telstra Corporation Limited. Following several years in technology consulting, Ms Balfour spent 14 years as a Senior Executive with Qantas Airways Limited during which time she held various positions including Chief Information Officer and Executive General Manager of Qantas Business Services. 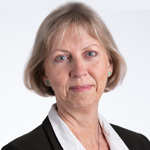 Anne Brown was appointed to the Board on 4 December 2019, and is a member of the Board Audit and Risk Committee, the Safety Committee and the Environment and Community Committee.

Ms Brown also represented ASX as the Chair and/or executive committee member of CCP12, an influential global industry association involving all major international clearing houses. Prior to the ASX–SFE merger, Ms Brown was a general manager with SFE, and previously worked with KPMG in both Edinburgh and Sydney.

Ms Brown holds a double major degree in accountancy and computer science from Heriot-Watt University, Edinburgh. She is a member of the Institute of Chartered Accountants of Scotland and a graduate member of the Australian Institute of Company Directors. 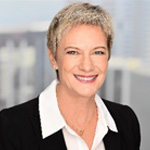 Sue Bussell was appointed to the Board on 4 December 2019. She is a member of the Board Remuneration and Human Resources Committee, Safety Committee and Environment and Community Committee. Her current term expires on 3 December 2022.

Ms Bussell was a partner at KPMG from January 2017 to January 2020 where she led the Workplace Advisory practice.

Prior to KPMG, Sue was a senior executive at Qantas Airways and held positions including HR, Commercial and was for many years Executive Manager Industrial Relations, responsible for industrial relations for the Qantas Group. Prior to Qantas, Sue was a commissioner in the Victorian Industrial Relations Commission, a consultant with the Australian Industry Group and held a management position with Ansett Airlines. Sue has strong strategic capabilities and a proven ability to deliver business results and manage business outcomes in difficult environments.

Sue is an Honorary Associate at Sydney University Business School and was a member of the Work and Organisational Studies Advisory Board, 2011 to 2019. Sue was a Board Member of Odyssey House, 2006 to 2008, and the Macquarie University Faculty of Business and Economic Industry Advisory Board, 2009 to 2017.

Sue was awarded a member of the Order of Australia in 2014 for significant service to industrial relations, as a supporter of women in business, and to the aviation sector. 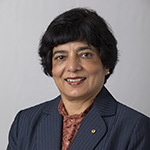 Chair of the Board Environment and Community Committee

Dr Kanga has had extensive experience in process safety systems engineering in the oil and gas and energy industry. She is an experienced non-executive director and is on the board of Sydney Water Corporation and a past member of the boards of Innovation Science Australia and Engineers Australia, where she was Chair and National President in 2013. She is a former President of the World Federation of Engineering Organisations. Marlene is a director of iOmniscient Pty Ltd which has artificial intelligence based video analytic technologies.

Marlene is the Engineers Australia 2018 Professional Engineer of the Year and has been listed among the Top 100 Women of Influence in Australia and the Top 100 Engineers in Australia. She is a Member of the Order of Australia, in recognition of her leadership of the engineering profession. 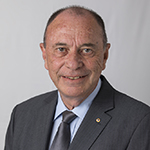 Chair Board Technology and Investment Committee

David Marchant was appointed to the Board on 21 July 2014. He is Chair of the Board Technology and Investment Committee and a member of the Remuneration and Human Resources Committee and Audit and Risk Committee. His current term expires on 20 July 2021.

Mr Marchant has extensive experience in the transport industry. David is the Chairman of QR and QR Ltd. He is a former Managing Director and Chief Executive Officer of Australian Rail Track Corporation Ltd and Director and Chair of the Australasian Railways Association. Mr Marchant also served as a Director of the Rail Industry Safety and Standards Board.

He was appointed a member of the General Division of the Order of Australia in 2013 for significant service to the rail industry through national structural reform and infrastructure upgrades and is a Graduate of the Australian Institute of Company Directors. 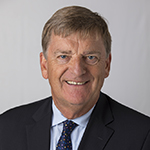 Chair Board Audit and Risk Committee

Tim Rothwell was appointed to the Board on 21 July 2014. He is Chair of the Board Audit and Risk Committee, and a member of the Remuneration and Human Resources Committee and Environment and Community Committee. His current term expires on 20 January 2021.

Mr Rothwell retired as Chief Financial Officer of Brisbane Airport Corporation in 2013, after 20 years with the organisation and is now a consultant to industry. He is a Board member of the Cross River Rail Development Authority and a Member of the Council of the University of the Sunshine Coast. 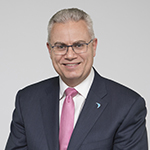 Jason Harfield was appointed Chief Executive Officer on 9 March 2016, beginning his career with Airservices as a flight data officer in Adelaide in 1989.

With more than 30 years of experience in aviation and the air traffic management industry, Jason has been a core member of the Airservices Executive Leadership Team since 2005. His executive leadership roles included leading the safety and future services functions as well as leading and transforming the air traffic control operations through the introduction of new services, advanced airport capacity and air traffic flow management capabilities, whilst reinvigorating Airservices largest operational workforce.

Prior to this, Jason held a number of operational management and senior management positions including Australia’s Head Air Traffic Controller and Australian Airspace Regulator as well as operating as a qualified operational air traffic controller.

Jason has an EMBA from Melbourne Business School (Mt Eliza) and has completed the Advanced Management Program at Harvard Business School. He is also a fellow of both the Australian Institute of Company Directors and Royal Aeronautical Society as well as a private pilot.