Home » About us » Projects » Honeywell SmartPath (Ground Based Augmentation System) 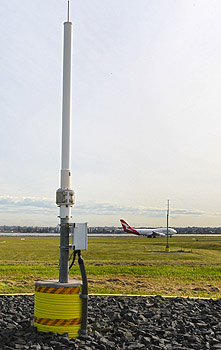 Ground Based Augmentation System (GBAS), known in Australia as Honeywell SmartPath, is a satellite-based precision landing system and is recognised by ICAO as a potential future replacement for current instrument landing systems (ILS).

The system uses GPS signals to provide aircraft with very precise positioning guidance during the final stages of an approach, both horizontal and vertical, which is especially critical  during the landing phase of flight. This allows for a safer, more efficient descent and landing.

Just one Honeywell SmartPath installation can guide up to 26 highly precise approach flight paths simultaneously within a 42 kilometre radius.

Honeywell SmartPath has been identified as an important enabler for improving airport capacity as part of the US Next Generation Air Transportation System (NextGen) and Europe’s Single Europe Sky ATM Research (SESAR) programs. FAA and Eurocontrol co-chair the International GBAS Working Group which is examining practical technical and implementation issues.

Airservices and Honeywell are both active members of the forum in support of the development of international standards and guidance material to encourage the global transition to Honeywell SmartPath.

The Honeywell SmartPath ground station is installed at an airport and consists of four reference receivers which collect navigation data from GPS satellites, a processor which provides corrections for GPS errors, GBAS-specific information as well as final approach path point and a VHF data broadcast unit to transmit digital data to aircraft.

The data transmitted by Honeywell SmartPath is received by the aircraft GNSS Landing System (GLS) to improve the accuracy of aircraft positioning and provide guidance for precision approach and landings. The GLS interfaces with cockpit displays and aircraft systems, such as autopilot or flight director.

For airlines, the benefits of Honeywell SmartPath include less flight disruptions and associated cost caused by ILS interference and requires minimal pilot training to achieve this.

Airports will also benefit from improved airport capacity from accurately-guided, simultaneous operations to parallel runways and reduced runway exit times therefore increasing capacity. The flexibility of where the Honeywell SmartPath station is located leads to improved airport access as only one area on an airport is required for the system’s infrastructure to be installed.

By using GBAS at an airport, air navigation service providers (air traffic control) can obtain reduced traffic delays and congestion as a result of more efficient and predictable approaches, reduced capital investment cost and lower ongoing maintenance as one Honeywell SmartPath covers all runways at an airport compared to one ILS installation required for each runway end, easier and less frequent flight calibration inspections when compared with ILS and continued operations even during routine flight inspection or airport works.

Airservices commissioned into service a Category I (CAT-I) Honeywell Smartpath SLS-4000 GBAS, the first and only GBAS to receive system design approval by the US Federal Aviation Administration, at Sydney Airport on 29 May 2014.

Airservices is currently installing a CAT-I GBAS at Melbourne Airport (YMML) and continues to examine further possible installations at other airports around Australia.

Categories of Precision Approach and Landing

Each category has varying decision height and visual requirements for when a pilot can decide to proceed or cancel a precision instrument approach or landing.

Airservices is implementing the Honeywell SmartPath service in five phases with a strong focus on delivering benefits to the industry as early as possible. Honeywell SmartPath will be an integral component of Australia’s next-generation, satellite-based air navigation system.

Close industry cooperation is a key element of the Honeywell SmartPath program. In transitioning to Honeywell SmartPath and other satellite-based services, Airservices continues to seek input and guidance from the community and industry members, including aircraft operators, the Civil Aviation Safety Authority (CASA), the Australian Government and airports.

In November 2006, Airservices and Qantas launched the world’s first GLS approach. Since then, Qantas has flown more than 2,500 GBAS-supported approaches and trained over 700 pilots on GBAS operations. Pilots have consistently reported that GBAS provides extremely smooth and stable guidance. Qantas is equipping its entire B737NG fleet with GLS. In January 2009, Qantas obtained CASA approval of GLS operations on Airbus A380s.

Phase 2 commenced in the third quarter of 2009 to replace the Honeywell SLS-3000 system with the SLS-4000 Honeywell SmartPath GBAS at Sydney. Honeywell SmartPath is the world’s first and only GBAS which has received US Federal Aviation Administration (FAA) system design approval. Airservices and CASA closely monitored this approval process.

Acceptance testing of the new system was carried out in August 2011 and a test and evaluation period commenced in late 2011. Airservices application to CASA to have Honeywell SmartPath Category I (CAT-I) operations at Sydney was approved in early 2014.

On 29 May 2014 CAT-I Honeywell SmartPath at Sydney was commissioned into service.

In Phase 4, Airservices will continue to contribute to the development of Honeywell SmartPath CAT-III ICAO Standards and Recommended Practices (SARPs). These standards will guide the specifications for developing CAT-III GBAS technology to reduce flight delays and increase airport capacity in all-weather conditions.